Dunno about you, but it would seem that Middle School is out. Has anybody seen a 70cm Barra lately? All reports of late echo ‘metreys or nothin’. Yesterday on the neaps, I wasn’t one of the lucky ones….literally flogged The Daly to foam…a 20 minute session with the trusty Tango Dancers just on the first of the incoming was all the day had in store. The spring tides however have produced plenty….and I mean plenty. Look for the incoming push with bait up the middle, throw on a Big Ass B52, Bomber or Classic 160 and move quicker than the tide.

Casting sessions have also done the trick, fish to 117cm taken on both monster sized and small plastics. Speaking of small plastics, the new Shads Soft Ons are hitting fish hard. Fished best ‘on the drop’ and jigged around the snags and ledge edges you rarely miss on hook-up rate given the two trebles on such a small lure.

Shady Camp must’ve cleaned up a little now, as reports begin to flow with some consistency from both Sampan and Tommy Cut creek mouths.

On the Snapper circuit, Charles Point is back on the cards with some rippers to 4kg caught using Black Magic Snapper Snatcher jig rigs. These things have been around for years and add a bit of spice to the presentation of your paternosta rigs. Next time you are going, do what I did….whack one on without telling your mate and watch him try to work out why you’re doing better than he….

This weekend is the ending to the neaps….might well be the best excuse you have to tell the wife…..?

All the best folks 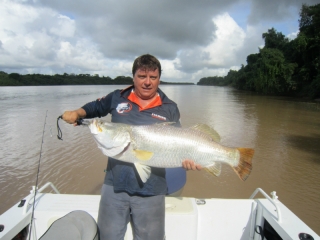