Well it’s been fun and games for the boys from Darwin’s Vision Sportsfishing. Earlier this week, a frenzied pelagic jigging session claimed more tackle than was expected and it therefore came time to improvise. Out came the tool box full of ring spanners and with a little bit of unique rigging the Mackeral were immediately cutting sick on bucket loads of steel. I’ve seen all sorts of things used in place of a chrome slice or jig including kitchen knives, desert spoons, Alfoil and CD’s but surely this takes the cake for dedication….it could get expensive!

The Mackeral have kept us alive this year, or at least upheld our enthusiasm and they still keep on coming from most popular locations. One crew were fishing North Gutter at night time and found Mackerel to 12kg in big numbers by jigging 7 inch Gulps on heavy lead heads.

Reports from wide of Dundee included one of the biggest Tuna I’ve heard of from around here…try 14kg!!??

Those Zerek Prawns haven’t given up either. Last weekend at The Peron Islands, a local angler was using the smaller sized Zerek rigged on a heavy Nitro head and the reef fish were nailing them with no remorse. In fact, it sounded as if this tactic was far outperforming dead baits. Don’t you love it when that happens…..

Incidently, with the inland barra scene proving tough going, Darwin and Bynoe Harbour have taken the front seat. One of the tricks for success here has been to downsize your gear…even down to 50mm plastics and 45mm surface poppers! Take note of the new 45mm and 60mm versions of the Halco Roosta Poppers now on the shelf. They can be ‘blooped’ as normal or used to partially ‘walk the dog’ for the best of both worlds. If you go this route, be prepared to also downsize your braid so you can cast em the distance….but I’m tipping the rewards will be worthwhile. 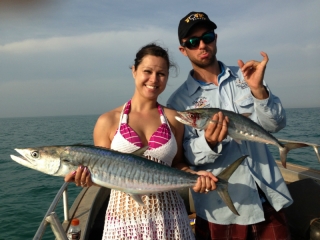